When Sanford Moss patented an ingenious gas turbine more than a century ago, he hoped the device would change the world. And it eventually did, though not in the way he originally imagined.

Moss’ gas turbine used too much fuel and produced too little electricity, so he shelved it and moved on to other work. Then, in 1917, the National Advisory Committee for Aeronautics, the predecessor of NASA, came calling. World War I, the first conflict that involved planes, was raging and the government wanted GE to help American warplanes fly better in the thin air found at high altitudes. Moss dusted off his patent and built a radial turbine that squeezed the air entering the engine until it was as dense as the air close to the ground. The device, called the turbosupercharger, helped planes recover lost horsepower and earned Moss a place in the National Aviation Hall of Fame. It also launched GE into the aviation business. “He basically moved a sea-level airport to 14,000 feet with the turbosupercharger,” says Paul Corkery, general manager for turboprop engines at GE Aviation.

In some ways, Corkery is now walking down the path Moss blazed. Corkery spent the first half of his three decades at GE refining gas turbines. Today he’s leading a team of 400 aviation engineers who have developed a new turboprop engine. They believe the engine — the first such new engine design for the general aviation turboprop market in 50 years — will elevate the aviation market to new heights.

Their turboprop engine, called the GE Catalyst, combines technology and know-how from GE’s large commercial jet engines with digital engine controls in a way that opens new design options for plane-makers. It is expected to radically change how pilots fly turboprops and aims to deliver fuel savings and cut CO2 emissions by up to 20% compared with engines currently on the market. The engine will be able to run on sustainable aviation fuel (SAF), sometimes referred to as biofuel, and it could also power new types of unmanned aerial vehicles and hybrid aircraft. “In terms of technology, it really is an enabler for the aircraft manufacturer,” Corkery says. “A lot of the decisions that we made when we started developing the engine five years ago, they really positioned us well for the future.” 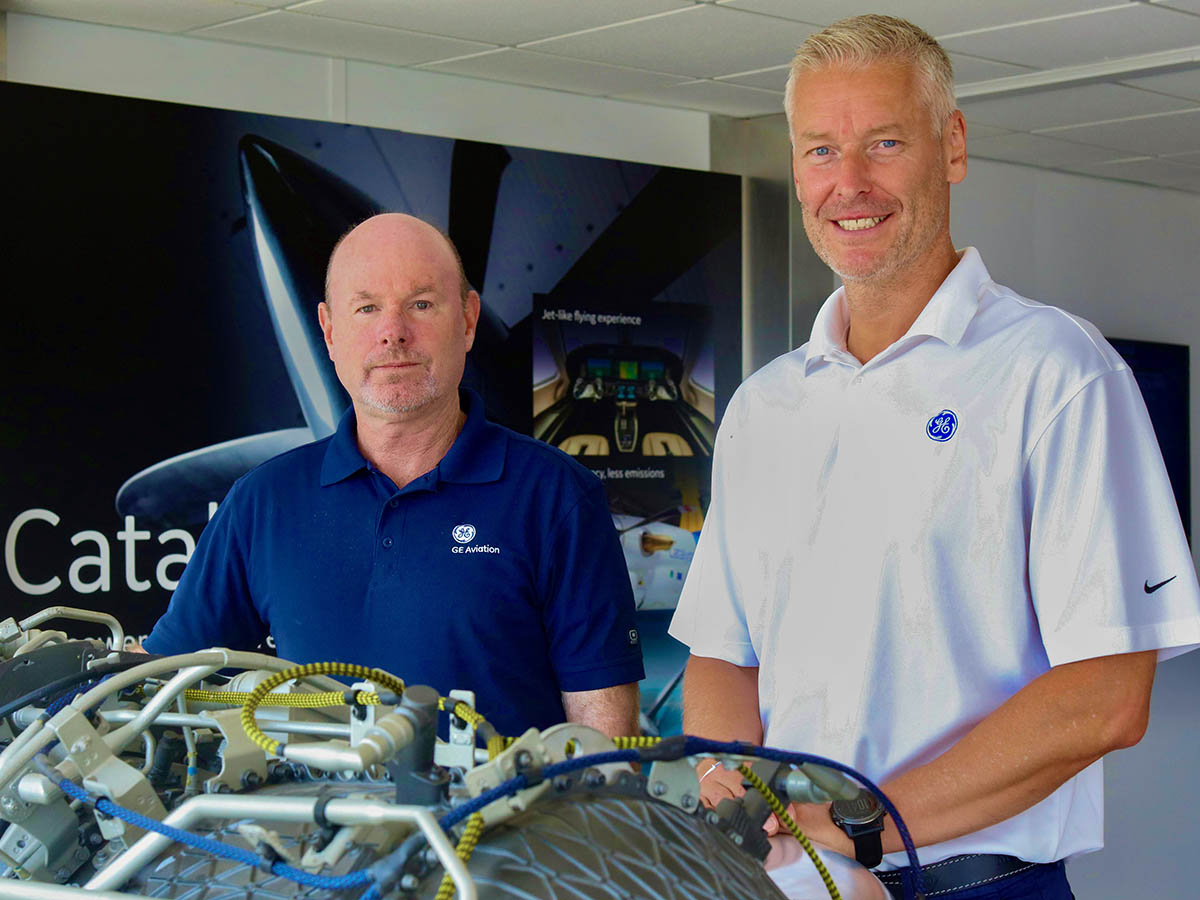 To achieve these gains, Corkery’s team turned to advanced technologies that had not been tried in turboprops. Take the variable geometry in the Catalyst engine’s turbine — a feature originally developed by GE and aviation legend Gerhard Neumann for supersonic engines. Neumann figured out how to turn the vanes on the engine’s stator during flight, change the pressure inside the turbine and make planes fly faster. Deploying it in the Catalyst turboprop engine allowed the engineers to increase the pressure and temperature inside the engine, burn fuel more efficiently and give it more power and speed at altitude. “More power enables the aircraft maker to design a bigger, more comfortable cabin and build a plane that can fly fast at high altitude,” Corkery says. “But not only can I fly fast, I burn less fuel and emit less CO2. We know how to do it because we’ve done all of that on the big engines.”

Last year, GE made a commitment to becoming carbon neutral in its own operations by 2030. In GE’s 2020 Sustainability Report, released early July, the company went even further, with an ambition to reach net-zero by 2050, including Scope 3 emissions from the use of sold products. GE partnered on the Catalyst with the EU’s CleanSky initiative and its Maestro project, the largest European research program devoted to the decarbonization of aviation.

In late July, GE brought a mock-up of the Catalyst engine to the EAA AirVenture air show in Oshkosh, Wisconsin, perhaps the world’s largest gathering of aviation companies and enthusiasts. “The reason we are in Oshkosh is because this is the center of the business and general aviation market,” Corkery says. “Everybody is here, and we’re bringing new technology.” An actual Catalyst engine is currently mounted on a special Beechcraft King Air “flying test bed” in Berlin and awaiting its first flight.

But if big engines give the Catalyst engine its brawn — it can deliver 1,300 shaft horsepower — then another new feature, the “full authority digital engine control,” or FADEC, which controls both the engine and the propeller, is its brain. It consists of two fully redundant computers that listen to a slew of data from sensors about speed, air temperature and density, altitude and many more factors, and allows the pilot to fly the plane in an optimal way.

Jets have been using this technology for decades, but in the commercial turboprop market, “the pilot is the FADEC,” Corkery says. The Catalyst’s FADEC will allow the pilot to spend more time flying the aircraft than fine-tuning the engine’s settings. “The FADEC knows the conditions my plane is in, and it then optimizes the pitch of the propeller and the fuel flow around those conditions,” Corkery explains. “The pilot will no longer need to consult a chart to optimize the flight around the correct parameters with four separate levers. It will all be digitized. The pilot will just have a single lever. It will be like flying a jet.” 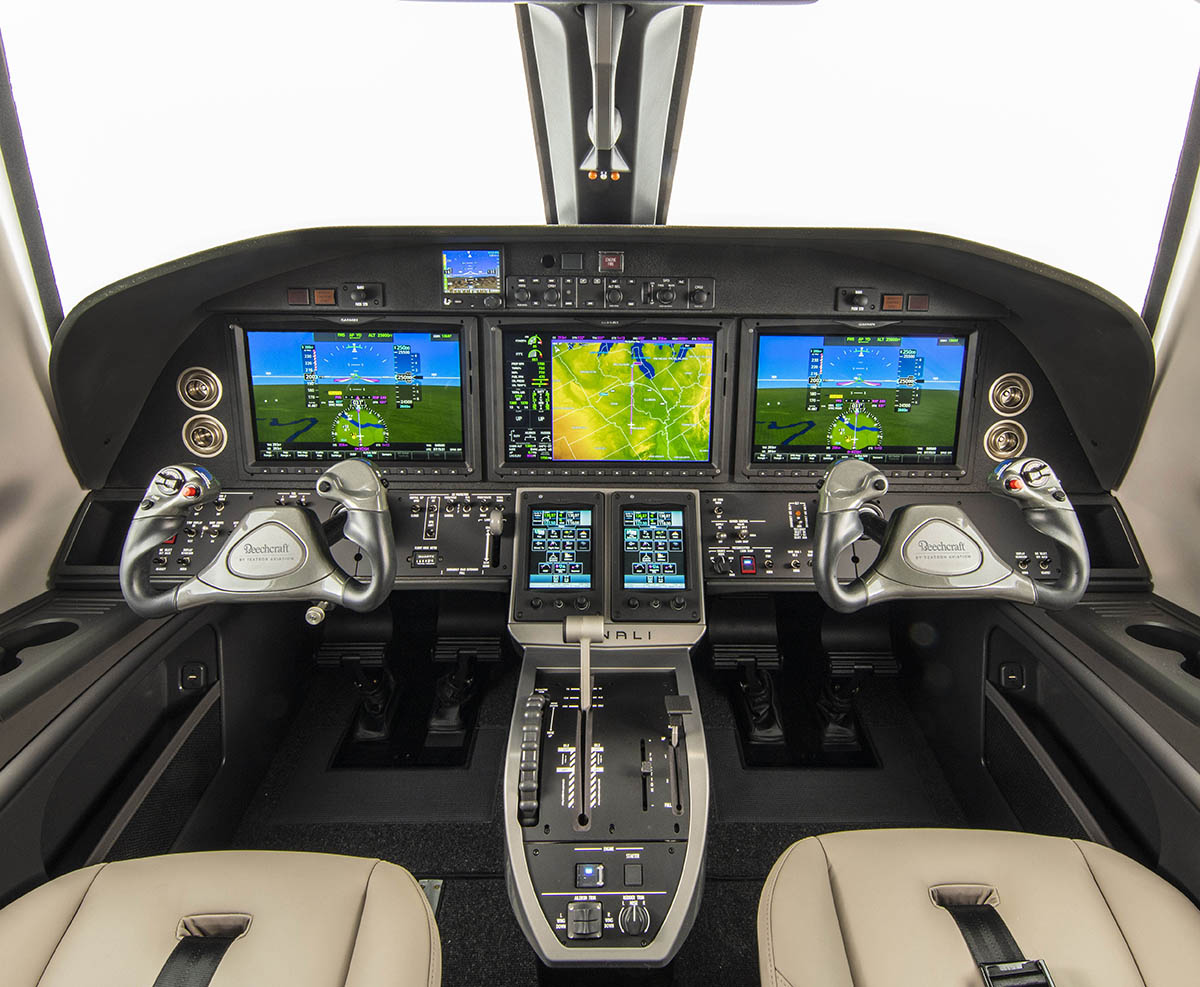 The cockpit of the Beechcraft Denali. “The pilot will just have a single lever,” Corkery says. “It will be like flying a jet.” Image credit: Textron.

Milan Slapak, CEO of GE Aviation Czech in Prague, the headquarters of GE’s turboprop business, also points to a future where the FADEC “opens the door to autonomous flying. It doesn’t mean that you will have somebody hidden in a container remotely controlling the drone, for example, or any kind of unmanned vehicle,” Slapak says. “You can have artificial intelligence, and that AI will give the directions to the FADEC and the FADEC will take care of the rest.”

Textron Aviation has become the first aircraft manufacturer to embrace the Catalyst engine’s capabilities.  The company worked with GE to develop an engine that would support the design of the Beechcraft Denali, a new, clean-sheet, high-performance turboprop. The single-engine plane will be able to cruise at 285 knots, carry 1,100 pounds of fuel and reach 1,600 nautical miles with four passengers and a pilot on board. “When you look at the development of the Beechcraft Denali as well as the GE Catalyst engine, it really went hand in hand,” says Alex Hunt, technical marketing adviser at Textron. “GE was helping us with the engine requirements needed to maintain this airframe in order to really create a business-jet-style aircraft.”

Echoing Corkery’s earlier comments, the Denali’s jet-like cabin is a good example of this collaboration. Textron engineers make the spacious cabin from a single piece of aluminum, to achieve extra strength and increase the cabin’s size.  Textron Aviation makes extensive use of high-speed, machined monolithic (single piece) components just like it does in its larger jets, to reduce weight, cost and increase the cabin’s size. Air drawn from the engine through a digital pressurization system provides cabin pressurization so that passengers cruising at 30,000 feet will feel they’re at just 6,000 feet. That’s the kind of experience that has been available only in the latest passenger jets, like the Boeing 777X. “It’s very comfortable for the passengers. You arrive feeling relaxed, refreshed,” Hunt says. 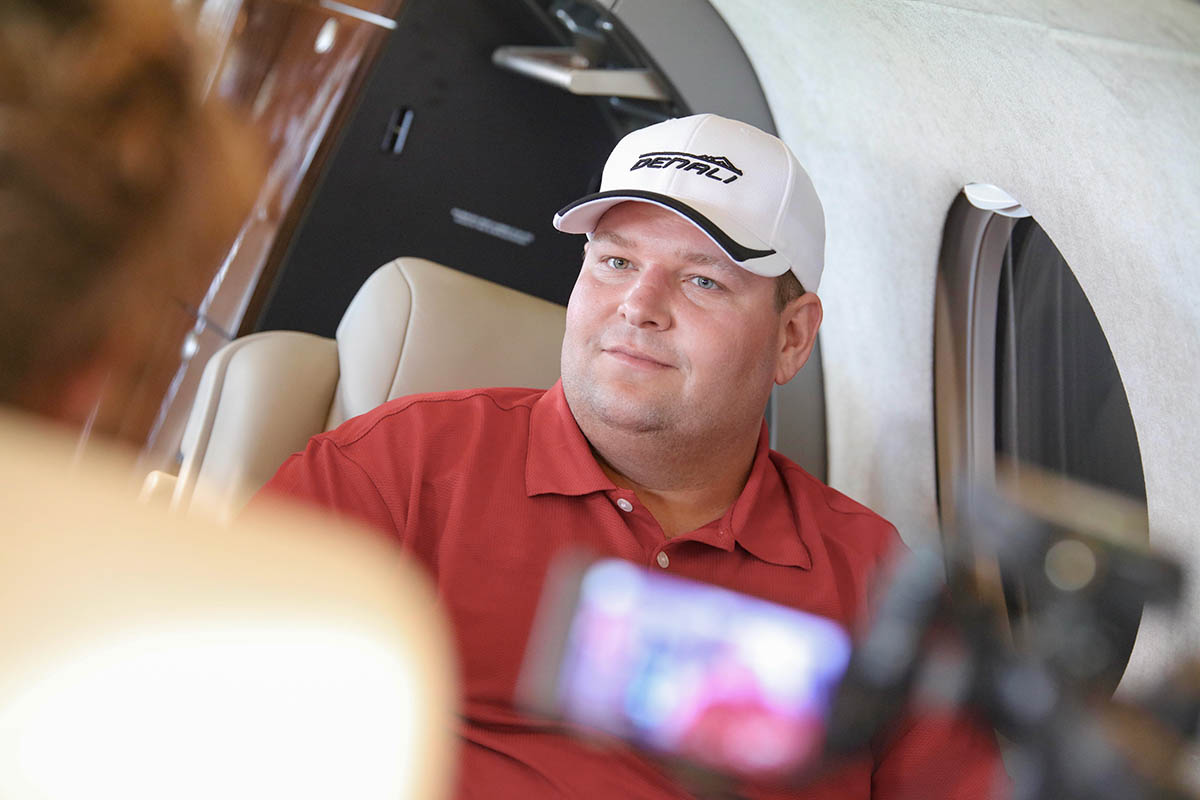 “When you look at the development of the Beechcraft Denali as well as the GE Catalyst engine, it really went hand in hand,” says Alex Hunt, technical marketing adviser at Textron. Image credit: Alex Schroff for GE Reports.

Like many aircraft manufacturers and airlines today, Hunt is excited about the engine’s efficiency and its ability to run on SAF. “One of Textron Aviation’s biggest investments lately has been in sustainable fuels,” Hunt says. “Our entire fleet of turbine aircraft can be powered by SAF, and we are excited to continue that with the GE Catalyst engine on the Beechcraft Denali. Sustainable aviation fuel really helps reduce the carbon footprint.”

Corkery and his team developed the GE Catalyst engine almost entirely in Europe. (They have performed some ice testing in Canada.) Italian engineers from Avio Aero, a GE Aviation company, helped design the engine and key parts like its gearbox, the FADEC and high-pressure turbine components; teams in Poland and Germany worked on the compressor and other parts; and the Czech Republic provided the headquarters, test cells for ground testing and the assembly plant. “To staff 400 people on your team quickly is not an easy task,” Corkery says, “so we go where the capability is.” 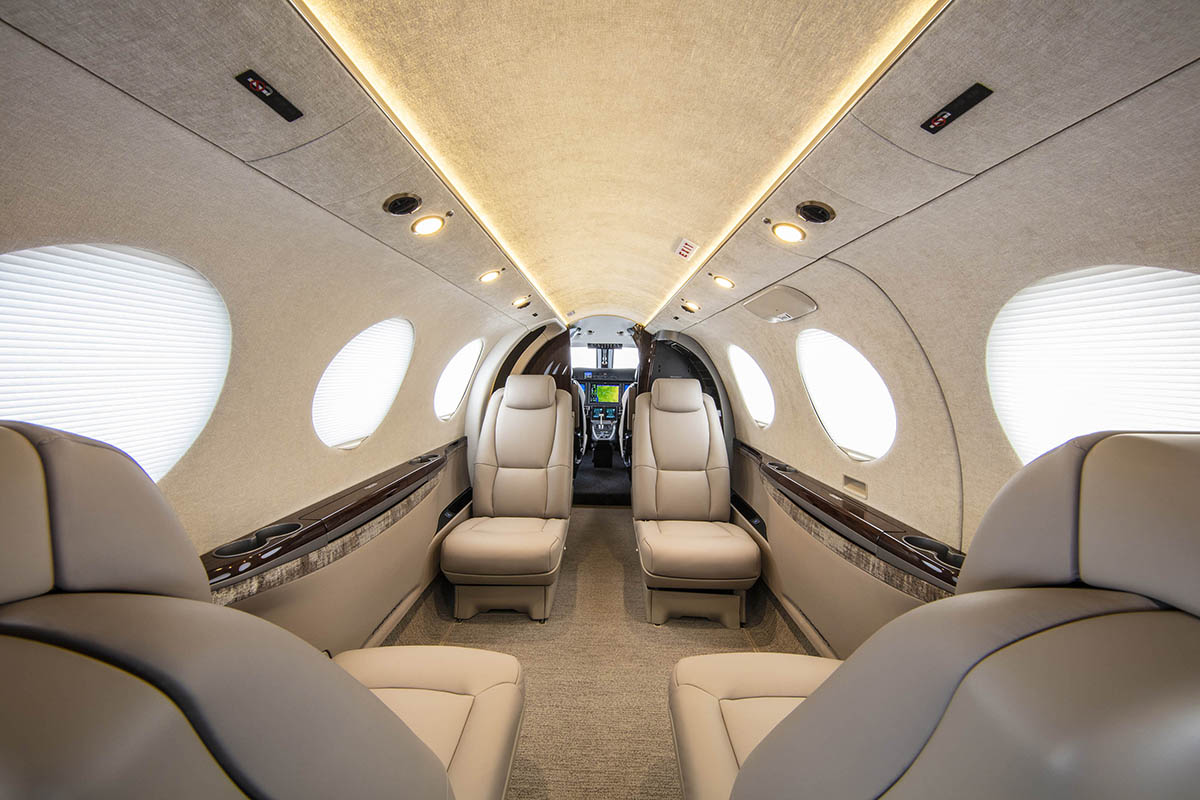 The engine helps pressurize the cabin so that passengers cruising at 30,000 feet will feel they’re at just 6,000 feet. Image credit: Textron.

The company also partnered with the Czech Technical University (CVUT) to develop a new preventive maintenance methodology for modern turboprop engines like the Catalyst. CVUT’s test aircraft will be carrying out flight experiments, generating data for the methodology research. The first one will take place in Berlin, but the bulk of the test will happen in the Czech Republic. “Every new engine that goes through development nowadays also needs a state-of-the-art performance-monitoring and predictive model to come with it,” Slapak says. “CVUT picked King Air 350 to be the ideal flying platform to feed the model research and development with data and at the same time we are happy that the university’s aircraft will be the one making the first flight of the Catalyst engine a reality.”

In the end, Sanford Moss’ remarkable turbine really did help change the world. So it’s perhaps no surprise that now engineers all over the planet who are working for the business he helped launch are once again taking it to new heights.